The luxury soul, the knife star

The family factory Claude Dozorme has not stopped offering a cutlery ever bolder, inventive and imprinted with the codes of haute couture or jewelery. 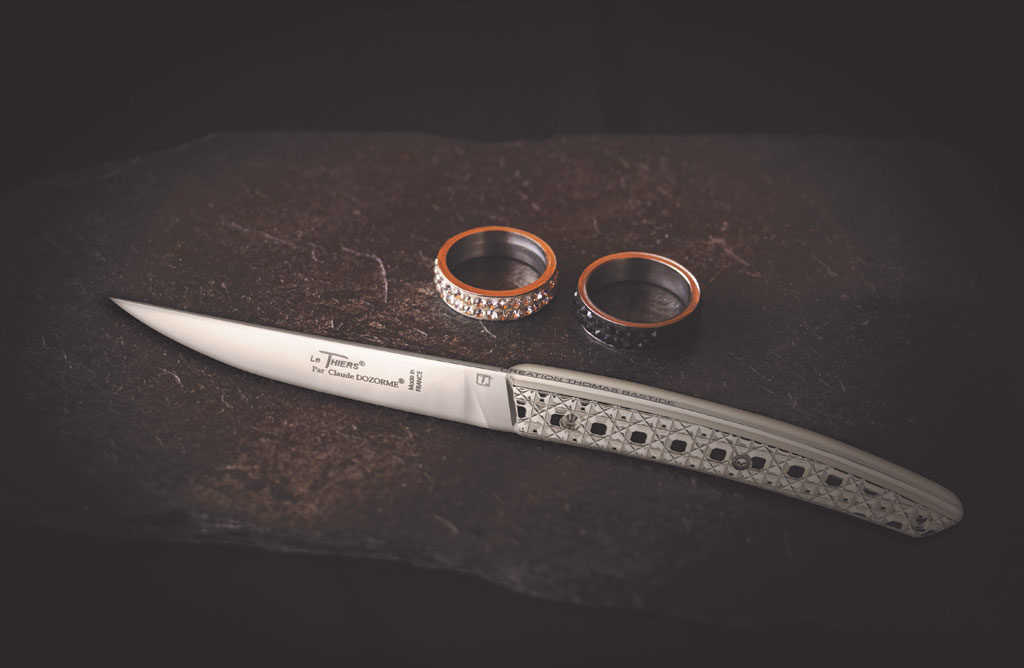 All around the world, many prestigious establishments (La Tour d’Argent in Paris, Royal Hotel of Evian les Bains or Jean-Georges in New York to name a few) do not hesitate to dress their knife tables branded by the famous brand with the head of a wolf.

It is for this new clientele, whose luxury is a daily reality, that the factory has designed a brand new knife called “L’Ame Luxe”.

A new creation by Thomas Bastide

For this last creation, the cutlery Claude Dozorme has once again approached Thomas Bastide, a famous designer. After having reinterpreted Le Thiers® twice already, Thomas Bastide has reoffended with a variation of the Shadow model.

Atypical knife, the Shadow offers 2 asymmetrical handles Bakelite. For this new version, he wanted to replace one of the sides of the handle with a much finer and luxurious piece. Used to work the crystal, Thomas Bastide had the idea to add a piece of metal cut like a diamond faceted. For this, he was inspired by an existing size in the crystal of lapidaries: the diamond cut diamond he applied to one of the nickel ribs affixed to this new Le Thiers® knife.

The work done by the designer on the face of the neck is worthy of a work of goldsmith. A true declination high-jewelry!
The back of the handle is offered in black bakelite or polished matt or gloss polish according to the wishes of the customer.

L’Ame Luxe, the latest addition to the Claude Dozorme range of knives, was launched at the last Maison & Objet show. A luxurious version for the famous Clos Laguiole and sommelier Le Thiers® was also previewed on this occasion.